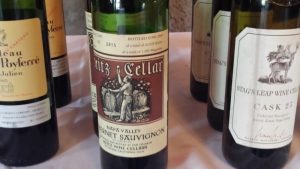 Tasting Bordeaux from France side by side with examples from Napa and the Santa Cruz Mountains, all from a single vintage, is an illuminating way to see what gets the juices flowing.

Attendees of Premier Cruz on November 6, 2015, at The Mountain Winery were treated to a rare presentation of nine excellent Cabernets, along with an even more rare appearance by surprise guest, Warren Winiarski, founder and former owner of one of Napa’s most iconic wine brands of all time, Stag’s Leap Winery. His comment regarding judicious blending, “Bring together opposites to create a sense of completeness,” will forever remain a mantra. A brilliant, charming man. 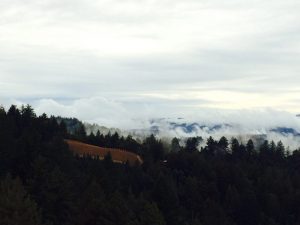 Premier Cruz is always a microcosm of the mountain’s magnificence, and the breadth of micro-climates in the Santa Cruz Mountains. Expanding the scope by introducing some well-known brands from Napa, along with two distinctive French visitors, gave the crowd of over 100 who came out on a rare day of sprinkles, something to chew on. Cool, grey skies provided perfect Bordeaux weather, as one cannot enjoy the heady black-fruited frenzy, leather-wrapped and cigar-infused Men’s club aromatics and the voluptuous tannins of Cabernet any other way.

One quick note: 2005 was an extremely dry and warm year in France. It was a nearly perfect growing year in California.

The nine wines, all labeled as Cabernet, and all a decade into their lifespans, were, along with my impressions and notes: 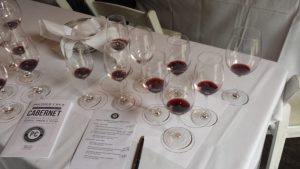 It was interesting to compare findings and favorites with the guests, who ranged from inebriated wine neophytes to career winemakers and sommeliers. Several things were apparent. The wines that make the biggest, loudest noises, are the ones most people remember, and are therefore the ones you will hear people talking about. These were the Ridge, with its massive American oak, and the Heitz Cellars Martha’s Vineyard with its rip-snorting juniper and menthol notes from the eucalyptus trees that dominate that vineyard.

Like heavy metal rock, those wines are not for everyone, but they do rather rudely demand your attention, like someone playing Led Zeppelin on Sunday morning at max volume.

The most attention-getting wines were not to me the most enjoyable, or the most interesting, but they will be the ones writ large on the lips and hearts of the masses. Hollywood and the music industry have trained us well.

Like those who prefer listening to the nuanced, practiced skill required to play acoustic guitar, cello, piano or harp, I am firmly in the camp of wines #1, 3, 7, 8 and 9, as they politely request your attention, and then proceed to rivet it with their masterful composition.

It is to these wines Warren Winiarski was referring when he said, “The finest wines are the ones that satisfy. The Latin root of satisfy is ‘enough:’ all you need is just enough. Anything more detracts from purity.”