Robert Mondavi: Looking Back on a Wine Legend

On June 18, 1913, wine pioneer Robert Mondavi was born and the wine world would never be the same. On the 100th anniversary of his birth, wine lovers came to the popular tourist destination Robert Mondavi Winery in Napa Valley. They raised their glasses to the California wine legend on what would have been his 100th Birthday.

In this video, Wine Oh TV‘s Monique Soltani sits down with Margrit Mondavi, Robert Mondavi’s wife of 28 years. Mrs. Mondavi takes a look back at her late husband’s life and his legacy. She also lets us in on their secret to living a full and meaningful life. 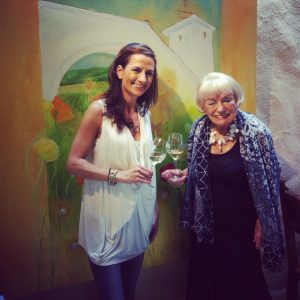 Robert’s Block naming ceremony: Following the toast and in honor of Mr. Mondavi and his love of the To Kalon Vineyard, the winery renamed one of the best blocks of the vineyard, ‘Robert’s Block.’

In 1966, Robert Mondavi founded the Robert Mondavi Winery with his sons Michael and Tim Mondavi in the Napa Valley with the goal of producing wines that would rival the finest wines of Europe. Robert Mondavi was the first major winery built in Napa Valley in the post-Prohibition era. Part of Mondavi’s original vineyard land included the To Kalon (a Greek term meaning “the beautiful”) vineyard originally established by Napa Valley pioneer H.W. Crabb in 1868.

Robert Mondavi died May 16th, 2008 and is well known for his role as one of the world’s leading innovators, producers and marketers of California wine.

“My wife taught me the importance of living well.”

“I’ve always wanted to improve on the idea of living well, In moderation, wine is good for you – mentally, physically, and spiritually.”

“Wine has been with civilized man from the beginning.”

“Even more importantly, it’s wine, food and the arts. Incorporating those three enhances the quality of life.”

“There are a lot of people with a lot of money, and I’m amazed they don’t understand what a great pleasure it can be to give”

“If you go back to the Greeks and Romans, they talk about all three – wine, food, and art – as a way of enhancing life.”

“My brother and I had saved $15,000 by working many years nailing fruit crates together.”

“I say to consumers: instead of relying totally on critics, drink what you like and like what you drink.”

“My mother served me wine and water from the time I was 3 years old.”

“We want to raise the art of living well.”