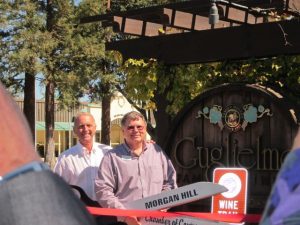 The Santa Clara Valley Wine Trail is officially open for business and you’re invited to explore it any time you are in need of some fine wine, poured in unpretentious settings, often by humble winemakers who still believe in doing things by hand. Each stop on the 29 mile Trail throughout the southern Santa Clara Valley is rich in history, blessed with splendid views and oozing the kind of intimate and memorable wine tasting experiences that make you want to post on Facebook: I was going to say, “tell your friends,” but that’s so yesterday.

The official launch of the Wine Trail, heavily championed by Mike Wasserman, President of the Santa Clara County Board of Supervisors, who was wearing his favorite Cabernet socks, was a festive affair that took place Friday, August 22. Following the ribbon cutting, a group of media and county officials embarked on a tour of four of the original wineries in the region, one dating back to 1913. Most of the four are open daily. A list of all the wineries on the Santa Clara Valley Wine Trail and their hours can be found here: santaclarawines.com 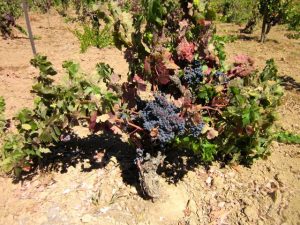 Our tour began at Guglielmo winery, in Morgan Hill, the oldest continually family owned and operated winery in the area since 1925. Its setting amid gnarly old vine Zin and Petite Sirah, flanked by rows of Carignane, is visually captivating, and you can see why Emilio Guglielmo, who emigrated from the Piedmonte region of Italy, found this place to his liking. He made his living delivering barrels of wine to customers all along the Peninsula up to San Francisco. Third generation owners, George, Gene and Gary, proudly carry on the family tradition and invite you to relax by the fountain in the piazza. Many a wedding takes place here under the beautiful tent or in the Heritage Room, awash in history. The wines not to miss, in addition to the estate varietals mentioned, include Fiano, Barbera, Sangiovese and Pinot Noir. Ask about the underground cellar where wine was made in monstrous redwood tanks during Prohibition.

Retired Air Force Reserve Colonel, Mike Sempognero, hails from Brooklyn, New York, and has been married to his high school sweetheart, Marie Claire, for over 40 years. He’s tried, unsuccessfully, to retire four times from one career after another. Asked why he got into the wine business, he explains that he needed to find a larger place for his daughter and her expanding family to live, and this place, set out in horse country, fit the bill. It had three houses, lots of land, a tasting room, winery and just enough custom crush and bottling capacity to keep him plenty busy. The winery, formerly Pedrizetti Cellars, dates back to 1913, when it was founded by Italian immigrants. Mike processes lots of other people’s juice, and when he finds something he likes, he puts his own label on it. The retail-rich tasting room is inviting and the back yard is a perfect place to relax with a glass of Johannisberg Riesling, grown right here in Santa Clara Valley. 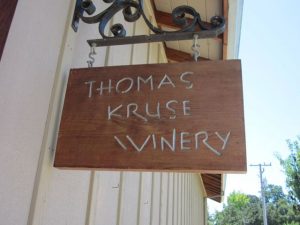 Trek on out to Thomas Kruse and you will truly flash back to the early days of winemaking. Kruse, 75, is the oldest sole proprietor winery in the United States, and he’s proud to still employ century old tools in bottling everything he produces. Here, you can admire the simple elegance of a French dosage machine, looking sporty in a lovely lacquered Art Deco shade of yellow, along with a Swiss bottling filler, a French cage and capsule applicator for sparkling and a beautifully simple hand corker made in San Francisco back in the late 19th century: it once belonged to the Mirassou’s.

Kruse claims Santa Clara Valley is one of the finest climates in the world to grow grapes: he’s been doing it since 1971. Not to be missed are his Chardonnay (unoaked and beautiful), the stout estate Merlot, lively apricot wine and divinely delicious Blanc de Blanc champagne. Yes, he can legally call it that: he’s grandfathered. And does he ever have a wicked, dry, mischievous sense of humor. Join the wine club for his newsletter alone. 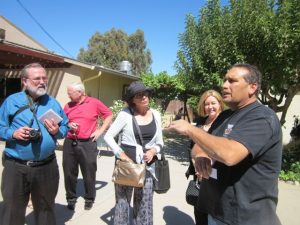 I admit I was so taken by the craggy beauty of the old Carignane vines in front of this local favorite watering hole on Hecker Pass Road, that I walked through deep, earthen furrows in my fancy Pliner shoes just to take a photo of the massive clusters, already beginning to show signs of bird damage. Asked when harvest would commence, owner, winemaker, chef and general manager of everything, Gino Fortino replied, “Too soon!” He had just finished packing recently picked apricots in the freezer to process later in the year. Right now, he has to bottle 1700 cases of wine before harvest begins in earnest. He needs the room, and he needs the barrels.

The family-run winery began operation in 1971, and after Gino took the reigns, he invested heavily in building a thriving event center and commercial kitchen, where he literally slaves away for every wedding and other happy occasion held in this bucolic setting. Near and far in the distance, the blonde hills are resplendent, and the old world charm of the ancient casks incorporated into the décor feels like a page out of an Italian travel magazine.

Must tries are the Charbono, Cask 140 and the fruit wines. 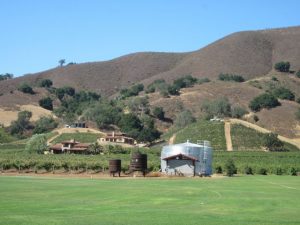 Dhruv Khanna has made it his mission to preserve the history of this beautiful old winery, established in 1918. Since he purchased the property, which was suffering from benign neglect, in 2000, he’s upgraded the old wine cellar to accommodate large groups of tasters, built a brand new climate-controlled tasting room that feels like it’s been there forever, and constructed an enormous event center equipped with state of the art wi fi and commercial kitchen. The views in all directions are stunning, with a PGA golf course less than half a mile away.

Khanna, a lawyer and cofounder of Covad, makes no bones about his intention of giving back to agriculture in Santa Clara Valley what Silicon Valley has effectively stolen from it over the past three decades. He tells us that over 4k acres of agricultural land have been lost each year for the past 30, as acres of plums, apricots and cherries became corporate edifices, parking lots, malls, freeways and housing developments. He hopes more Silicon Valley millionaires will invest their fortunes in something that respects the earth and the traditions of farming.

The quiet majesty of this place has truly captured his soul. In addition to replanting vineyards, experimenting with all manner of drought and pest resistant rootstock, he’s installed acres of gorgeous turf for cricket and soccer, and hosts many youth league sports, all without charge. The Moms make up the tab by drinking wine. Clever guy, with a dream as big as his imagination, and a bold, earnest vision for the Valley of Heart’s Delight.