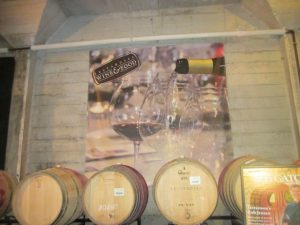 With the addition of more space, the second annual rendition of this extravaganza was noticeably better than its outstanding debut just 8 months earlier. The crowds were better dispersed, there were more tables and chairs for enjoyment, and the layout encouraged better access to the nearly two dozen restaurants who shared their wares. 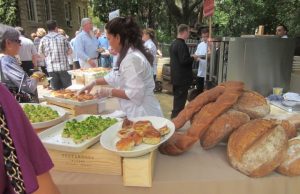 Upon entry, attendees were greeted with tables pouring Cuvée Los Gatos Rosé and Sierra Madre Pinot Noir, along with abundant food from OPA! Los Gatos, a sleek display of Teslas and the tantalizing aromas of The Grill on The Alley, where Chef Efren Cardenas and crew were cooking up fabulous filet steak salad served over grilled asparagus, onions and bacon, which was dynamite with “Rob’s Red” under the Cuvée Los Gatos label. Now we know what Rob Jensen drinks when the food demands other than Pinot. It does occasionally happen. 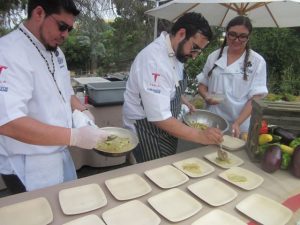 Nick’s Next Door served up plump, pan-seared abalone to an eager crowd that ate him out of house of home, while in-house Chef Dave Page’s expertly-synchronized staff hustled in and out of the kitchen with trays of green garlic panande topped with shrimp and fresh pea salsa with lemon and tarragon, while fresh baked bread came out of the oven. His ingenious cinnamon rolls with porcini and bacon were a smash hit, along with housemade butter. Psycho Donuts was in the house with an entertaining array of creations designed to complement Chard and Pinot, including Raspberry Road Rash. 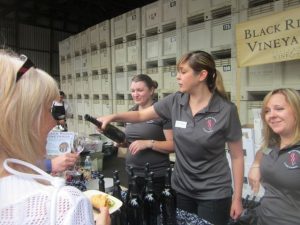 The Manresa gals, Stephanie Prida and Avery Ruzicka packed Cellar 6 with the biggest crowd of the day, while Peter Armellino and Josh Weeks of The Plumed Horse had to hustle to keep up with demand. Chef Shingo Katsura of Cin-Cin served up cold smoked Hamachi crudo with picked green strawberries and Yuzu, while Chef Alex Hult offered his beautiful bite of pickled beets. Chef Jarad Gallagher had a long line for his fabulous-looking dish of braised short ribs served with forbidden rice and Japanese mayonnaise.

Up top on the crushpad, Chef Jeff Stout of Orchard City Kitchen had spicy lamb tartare on shrimp chips that was precisely what the Doctor’s Pinot ordered. Splendid. Black Ridge poured Viognier, Pinot and Cab blend: the former was likely a good candidate for pairing with Madera’s smoked salmon and mussels in watercress velouté. Chef Tony Garcia of Ladera Grill served up tasty looking duck confit tacos, along with truffle mac and cheese, a combination hard to beat, especially if you had some Blackridge Pinot in your glass. (Winemaker Bill Brosseau crafts their wines.) 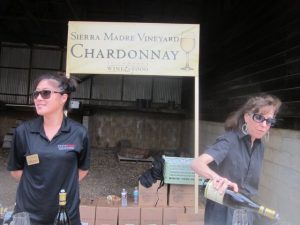 Chef Daniel Padilla and his cheerful team from Osteria Coppa happily dressed Jerusalem artichoke ravioli’s with grilled corn, fresh peas and fava beans, a nice pair with the Cuvée Los Gatos Chardonnay. The Dos Rubios Chard worked rather well, too. It was a beautiful day in the hills of the Novitiate: not too hot, and a sky filled with mare’s tails.

Everyone raved about the Riedel Seminar, now spoiled for life by the experience of beverage-specific glassware. Those who attended the Garys’ Vineyard seminar, helmed by Randall Bertao, Sommelier at Los Altos Country Club, were regaled by stories from the two Garys, Franscioni and Pisoni, along with commentary by winemaker Bill Brosseau. It was a very rare opportunity to taste vintages 2005 through 2014. By popular vote, the 2007 and 2010 vintages were the crowd faves, although they all had something to say. It turns out the Garys’ have known each other since they were kids, and their fathers went to high school together. They expressed great pride in the way Testarossa has consistently portrayed their fruit over the years they have worked together. 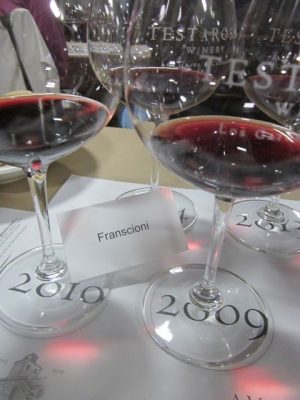 The entire affair was to benefit Cristo Rey Jesuit High School, and the bidding was going fast and furiously on items like a week in Cabo, dinner for 6 cooked by Alex Hult and my favorite of all, a statue of Saint Francis himself, which went to Diana Jensen for $490. This year, there were 41 auction items, with a total raised of $16,828 thus far. But they’re not done yet, and you can still play.

Testarossa’s indefatigable Marketing Director and Auction Manager, Julie Scopazzi, says they still have remaining seats for the 5-course wine paired dinner that are selling for $300 each. That should bring in another $7500, for an auction total of $24,328. The dinner takes place on August 20, and features five courses by Chef Dave Page, beginning with champagne in the cave, followed by rare Library wines. According to Julie, it is truly spectacular and modeled after their Diamond dinner that they put on annually for their top 10 wine club members: and she should know, she’s been one for years.

Big ticket items at the auction included a Week in Cabo, Suite at SAP Center for Shania Twain and Gavin DeGraw, Shopping Day at Santana Row and Date Night in Los Gatos with Dinner at Manresa and a night at the Toll House.

Kudos to all the hard-working staff at Testarossa who pulled the second edition of this brilliant event off in even finer style than the first.

Like well-crafted wine, events, too, can get better with age.