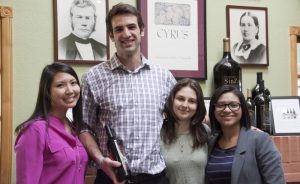 Culinary students compete for top honors in a student cooking competition and for scholarship funds. Luce at the InterContinental San Francisco announces its second annual Culinary Clash, inviting culinary students to compete for a chance to cook with the restaurant’s Michelin-star Chef de Cuisine Daniel Corey. This year’s competition is in partnership with the California Culinary Academy (CCA) and The Art Institute of California – San Francisco, a campus of Argosy University  (Ai California — San Francisco), with proceeds from the dinners benefiting each school’s scholarship fund. Students submitted menus and corresponding recipes and four finalists will be selected to cook at Luce and showcase their menu on a designated Sunday, starting on March 3, 2013.

“Last year, there was so much excitement from the kitchen to the dining room surrounding each dinner and we can’t wait to see what this year brings. The Culinary Clash is not only a great way to support education, but it is also a once-in-a-lifetime opportunity for culinary students to get some hands-on experience in a fine dining establishment.”

The menus featured at Luce will be judged by a panel of hotel executives, local personalities, foodies, and food writers, in addition to guests of the restaurant each Sunday evening. Wine Oh TV’s Monique Soltani judged the event last year and has been asked back to be guest judge on March 10th. The first place winner is invited to cook alongside Chef Corey and the Luce team at an off-site national food and wine event. Last year’s winner worked with Chef Corey at the prestigious James Beard House in New York.

In addition to showcasing their menu in a Michelin-starred restaurant, the finalists will also receive special training on wine pairing with Luce’s Beverage Director John Wight and partners from the Wine Road, an association of 190 wineries and 50 lodgings throughout the Alexander, Dry Creek, and Russian River valleys in Sonoma County. Students will spend a full day exploring featured wineries, learning how to pair with their menu being featured at Luce.

A portion of proceeds from each menu sold during the four Sundays will go to the scholarship fund of the featured school of that evening. The three course dinners are offered at $40 per person from Sunday, March 3, 2013 through Sunday, March 24, 2013. Wine pairing, tax, and gratuity are not included. The winners will be announced during a special event at Luce on Thursday, March 28, 2013.

Located on the lobby level of the InterContinental San Francisco in the South of Market district, Luce offers a modern and sophisticated dining atmosphere. The restaurant is open for breakfast, lunch, and dinner and serves brunch on weekends. For reservations, please call 415.616.6566 or visit www.lucewinerestaurant.com.