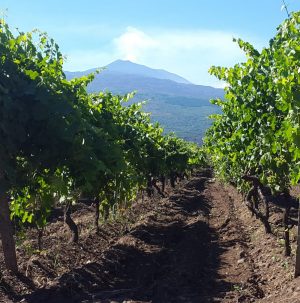 Antonio and José Rallo: “A long term project shared with our parents Giacomo and Gabriella, to propose the excellence of Sicilian wine, from Contessa Entellina to Pantelleria, from Etna to Vittoria. All areas with an extraordinary viticultural potential.”

With the harvest 2016 Donnafugata realizes its ambition to produce wines in eastern Sicily from the prestigious appellation areas Etna, Cerasuolo and Frappato di Vittoria.

A long-term project that the wine estate has planned for quite some time and for which the first important corner stones have been set in the past months in view of the upcoming
harvest.

In the Etna region Donnafugata counts about 15 hectares (37 acres) of vineyards in production: about 13 hectares (32 acres) of Nerello Mascalese and 2 hectares (5 acres) of Carricante: the vineyards are on the northern slope of the volcano, in Randazzo, at an altitude of 750 a.s.l. in the districts of Monte La Guardia, Allegracore and Calderara.

The Carricante harvest will start within the end of September and the
grapes will be vinified in the cellar that Donnafugas acquired in the district Statella in Randazzo.

In the territories of Cerasuolo di Vittoria and Frappato harvest will start soon. Here the vineyards in production are about 18 hectares (44 acres) and are situated in the area of Acate in the district Bidini.

The grape varieties are Nero d’Avola – about 11 hectares (27 acres) – and Frappato – about 7 hectares (17 acres) -. Nero D’Avola will be collected first, starting from mid September on, and then Frappato.

“An important step which we have contemplated for a long time together with our parents Giacomo and Gabriella. – affirm José and Antonio Rallo, who lead Donnafugata today – A project which proposes the excellence of Sicilian wine, from Contessa Entellina to Pantelleria, from Etna to Vittoria. All areas with an extraordinary viticultural potential. A strategic vision which will be developed gradually and which will fully bear its fruit in the years to come.”