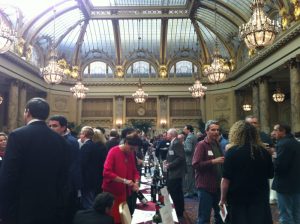 With over 100 Bordeaux wines to taste I was like a kid in a candy store or better yet a Wine Oh at a 2010 Bordeaux wine tasting last month when Bordeaux’s most renowned estates showcased their 2010 vintage at the Union des Grands Crus de Bordeaux (UGC) at The Palace Hotel in San Francisco. 2010 was a magical vintage for Bordeaux wines, but that isn’t always good news for wine loving consumers. Higher scores means higher prices and 2010 Bordeaux prices are 40% higher than the record breaking 2009 vintage.

What is UGC? Founded in 1973 UGC is an association consisting of 132 grand crus estates with the same high standards of quality, UGC members make amazing wine and then travel the world to share their recent vintages to the media, importers, distributors and wine enthusiasts like Wine Oh TV. I was honored to be invited to the prestigious wine tasting event and here are a few of the 2010 Bordeaux wines I tasted. 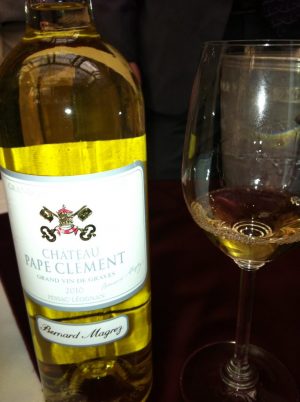 Located in Pessac, near Bordeaux, is named after its most famous owner: Pope Clement V. The Château Pape Clément is one of the jewels of the wide range of vineyards Bernard Magrez owns worldwide. Based in Bordeaux, this owner has made quality his hobbyhorse, his strength to face a growing competition in the wine sector.Where the care given to this land whose virtues are exceptional reputation Pessac over 7 centuries.

While the Château is rooted deeply in the past, it’s constantly moving with the times and towards the next generation of wine drinkers. Bernard Magrez, owner of four “Grands Crus Classés” in Bordeaux now offers its fans a space to share their online tasting moments in pictures and videos. Wine lovers of Bernard Magrez wines can send their wine tasting videos and be broadcasted on the owner’s personal Youtube channel and on Facebook. Instagram users can also publish their creative pictures on a wall of images dedicated to the Bernard Magrez universe by simply tagging them with the word: #Magrez. 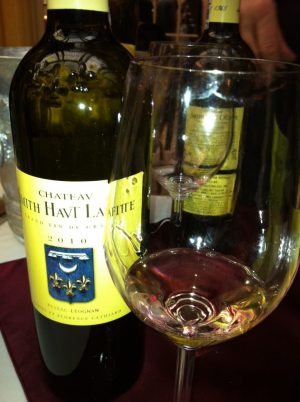 Château Smith Haut Lafitte is an amazingly great growth and considered “the quintessential Graves” and that is thanks to its amazing terroir in one single block. Its rich history roots back to the Crusades but most recently has been owned by Florence and Daniel Cathiard since 1990. The Chateau is famous for making both elegant and powerful red and white wines.

Smith Haut Lafitte Bordeaux is made up of 64% Cabernet Sauvignon, 30% Merlot and 5% Cabernet Franc and a traces of Petit Verdot. 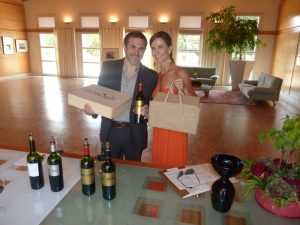 Château Brane-Cantenac was founded in the 18th century and considered one of the best second growths at the time of 1855 Médoc classification. In 1833 the estate was acquired by Baron de Brane also known as “Napoleon of the Vines.” Today the chateau is owned by Henri Lurton and has a state-of-the-art cellar with an owner who is dedicated to making the best wines possible. I had a chance to tour the modern estate and cellar when I visited the Château in September 2012. We also go our hands on some of their amazing wines (pictured to the left). The estate produces 150,000 bottles with grape varieties of 55% Cabernet Sauvignon, 40% Merlot, 4.5% Cabernet franc, and .05% Carmenère. 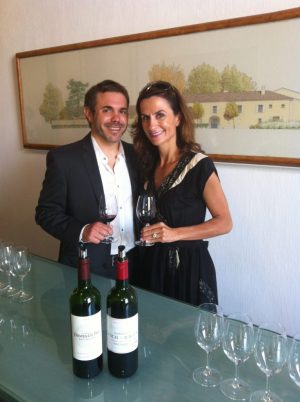 Located on the outskirts of Pauillac on the platea de Bages. Château Lynch-Bages used to belong to the Lynch family, who came from Ireland, and was purchased by Jean-Charles Cazes in 1934. In 1980, Jean-Michael Caszes started an in-depth modernization of the property. Opening up a hotel and restaurant for wine lovers to enjoy. They welcome the public to come and visit and taste their wines and share their passion with you. They produce 350,000 bottles of wine with the grape varieties including: 72% Cabernet Sauvignon, 20% Merlot, 5% Cab franc, and 3% Petit Verdot. While I tasted their 2010 Bordeaux at UGC in San Francisco, I also had the honor of touring the Château and having lunch at their restaurant  in Bordeaux with my husband last year. I can say their warm welcome was nearly as wonderful as their wine;) 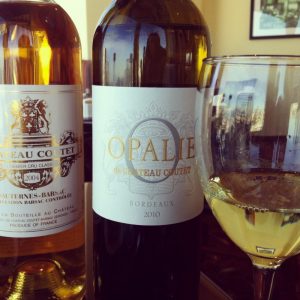 Long before Château Coutet was classified as a First Growth in 1855, Thomas Jefferson, proclaimed Château Coutet as the best Sauternes from Barsac way back in 1787. Today, as the oldest and largest Barsac estate, Château Coutet stays true to its tradition of distinction and quality. While they are routed in Bordeaux’s rich history the past doesn’t keep Coutet from moving toward the future. That’s thanks in part to the face behind the First Growth, Aline Baly. While the property dates back to the 13th century, Baly is moving Château Coutet 5G into the future, call it Bordeaux 2.0! Aline is not afraid to spread the word of the sweet, white wines of Bordeaux all over the world wide web.

This social media maven, might just be the one to take the next generation of wine drinkers to the next level. To watch Monique Soltani’s video interview with Aline Baly CLICK HERE!

Other notable Bordeaux 2010 wines I tasted:

For Robert Parker’s scores on the Bordeaux 2010 vintage Click Here!