Ten “Dangerous” Wines You Have to Try: Wines of Danger 2015 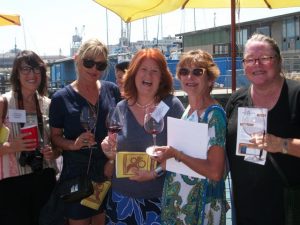 Ten “Dangerous” Wines You Have to Try By: Laura Ness


On an unusually brilliant tourism council-arranged day in San Francisco, nearly two dozen small, upcoming and totally forthright wineries poured their wares at Mission Rock Resort, near AT&T Park. The discoveries were many.

And not at all dangerous, except that once you start poking around in these little hornets nests of brilliance, you will find it hard to stop. Which is not a bad thing. But then, that could well end up being dangerous. 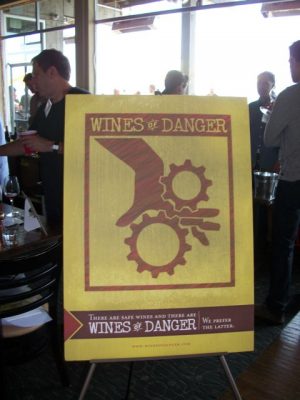 1. Tippy top of the list is Halcón, a totally fresh approach to winemaking that eschews adding anything except grapes to puncheons. The native yeast works slowly here, delivering richly textured, highly nuanced wines that deliver pure snapshots of each varietal. There wasn’t a single wine we tried from these folks, a pair of Brits who live high above the Anderson Valley in the Yorkville Highlands, that didn’t send the flag right up the pole. Probably the best, most well-rounded and brilliantly made wine was the 2014 Halcón Oppenlander Pinot from Comptche. Yes, that’s NOT a typo: I meant 2014. In fact, they were pouring two 2014 Pinots from Anderson Valley, including the Wenzel Vineyard, and both were gorgeous. Their 2014 Roussanne-Marsanne blend was also viscously provocative and vivacious at the same time.

2. Comanche Cellars wines (Monterey based) were showing brilliantly across the board, but special kudos to the 2011 SLH Pinot, which has the stuffing to go the distance. It’s a cellar wine with immediate and long-term promise. Don’t neglect the 2012 Comanche Cellars Merlot from the Cachaugua area of Carmel Valley, which restores the grape to its rightful place on top of the varietal lifeguard stand. The muscular and lithe 2013 Tempranillo from Tres Pinos (San Benito) is aged in American oak and drops hints of chocolate and coconut. 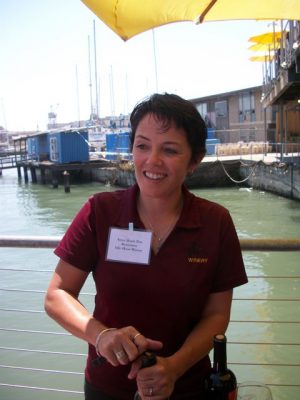 3. Anna Marie dos Remedios of Idle Hour turns out single vineyard wines with superb varietal character. The 2013 Idle Hour Cabernet Franc from Clarksburg is a smoothly textured classic, with high-toned aromatics and decisive nuances of Anaheim and Fresno chiles. She learned her craft from Josh Jensen of Calera.

4. Big Sur Vineyards 2013 Reserve Pinot from Monterey County is an intensely floral, scrub-brush-laden example of what dessication does to Pinot Noir in the Chalone AVA. It comes off with way more panache than you’d expect. The candied orange peel and red pie cherries are memorable in this complex fine-tannined hussy.

5. 2014 Scratch Rosé, Monterey: Winemaker Sabrine Rodems, ringleader of this Wines of Danger posse, dials in another bullseye with leather-gloved grace. This rosé of Grenache is intense, forthright, confident and strident, like the confident hand of a falconer ready to toss the bird into action.

6. Please excuse the goofy name of Stars & Freckles for one moment and imagine that the label actually has a constellation on it, although we know not which or where. The wines, though, bear serious consideration, with the 2013 Pinot from Carneros quite delicious and well-made. They’re changing their name, thankfully.

7. Eclectic’s 2013 Pinot Noir Blanc is an intellectual exercise no matter how you look at it. Winemaker Mike Trotta, who’s been at Elyse since 2001, and wife, Wendy, who has experience at Dominus, HdV and Cain, can do whatever they want for their own label. Making a white wine this way, from the most expensive Burgundy varietal on the market in California, takes guts. It’s lovely. And the 2013 Charbono from Suisun, done like all their wines in neutral oak, sings a troubadour song about the old days, and makes you want to devour a calzone stuffed with salami and peppered ham. 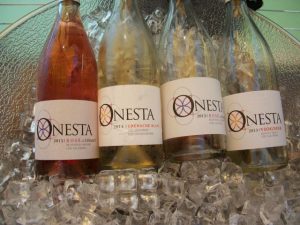 8. Three cheers for the Onesta 2014 Grenache Blanc. This grape is such a sardine. It can be overly oily and heavy or it can be perfectly slick with a skein of salt to balance the perfect amount of grease. Seriously, GB is not a ballerina. She wears hiking boots no matter what the occasion and cannot sneak into a room to save her rather generous ass. But winemaker Jillian Johnson tuned this one nicely to focus on the texture and the unctuous peach and nectarine skins, delivering a beverage with unmistakable personality. The 2013 Onesta Cinsault Rosé is pretty nice, too: it’s made from both saignée and grapes picked for rosé on purpose.

9. 2012 Waxwing Blair Vineyard Rosé, Arroyo Seco: a rosé for those who long for purity of expression and nuance, with an acid centerline adorned with delicate sprigs of fruit. Made by deftly talented winemaker, Scott Sisemore, this is a soprano of a wine, with a tonally crystalline clarity on the palate, ringing through to the finish with purity and rapierlike precision.

10. 2012 Cuvée Cellars Saralee’s Pinot Noir, Russian River Valley: made by Paul Rogerville (San Carlos) and his merry band of winemakers, this is a quintessentially fruit-driven wine that finishes with a really lovely smack of root beer barrels, which for some reason made me totally happy, being a longtime lover of root beer. If you’re going to drink RRV, you’re likely to get Cola, Dr. Pepper or root beer, and with this, you get the latter.

For more information on Wines of Danger, email srodems@scratchwines.com