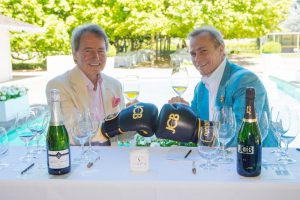 May 24, 2016, marks the official 40th anniversary of the “Judgment of Paris” but the wine world has been celebrating all year. If anyone in wine country knows how to throw a party it’s Jean-Charles Boisset.

On Sunday May 15th, JCB lived up to his legacy. The ever effervescent Boisset put on quite a show when he duked it out with Steven Spurrier for the ‘Judgement of Napa’.

iPhone video highlighting the wine tasting in the featured video at the top of the post. 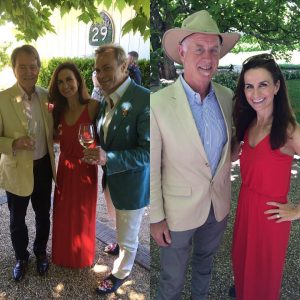 The playful event invited influencers to the launch of Spurrier’s Bride Valley English Sparkling Wine to the US. Spurrier of course is known for making the “Judgment of Paris” possible. His English sparkling wine launch paid homage to the historical event.

Spurrier flew in from England for the event and was alongside Raymond Proprietor Jean-Charles Boisset to host the blind tasting, which matched Spurrier’s Bride Valley English Sparkling Blanc de Blancs 2013 in a friendly competition against Boisset’s JCB No. 9 Russian River Valley Brut Blanc de Blancs 2009. 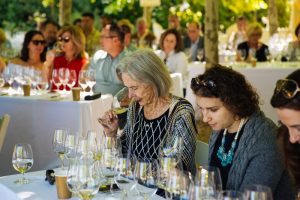 Guests were invited to vote for their favorite and the winning wine was the JCB No. 9 Russian River Valley Brut Blanc de Blancs.  Once again, California captured the voter’s hearts as the favorite, and it was a fitting tribute paying homage to the original event which took place on May 24th, 1976.

I would like to add that both wines were delicious, but I voted for Spurrier’s Bride Valley English Sparkling Blanc de Blancs 2013. As did the rest of my table. A true testament that the Brit knows his bubbly! 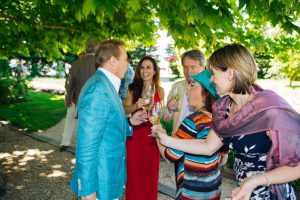 This was the first time that anyone could taste and purchase the Bride Valley English Sparkling Blanc de Blancs 2013 in the U.S.

Additionally, guests were treated to a flight of rosés following the blind tasting which included Spurrier’s Bride Valley Rosé Bella 2013 (of which only six bottles made it into the country, because of its limited availability and quantity produced in 2013) and Boisset’s JCB No. 13 2009 Crémant de Bourgogne Rosé and JCB 2009 No. 34 California Brut Rosé.

“Our dear friend Steven and his family had an endearing vision of producing sparkling wine on par with the world’s best in the chalky soils of England… At the time of his original vision as early as 2007, he recognized England’s potential for sparkling wine before the world had fully realized its potential. We encouraged him always, and are honored and inspired to be his partner in importing Bride Valley to America… whether France, California or England, we are one world of wine!”

“After 50 years in wine – and inspired by the unique chalky soils on my wife’s Dorset sheep farm – we decided to join the English sparkling wine revolution. In 2008, Bella and I went to select the finest Chardonnay, Pinot Noir and Pinot Meunier root stocks from Burgundy’s famous Pépinières Guillaume vine nursery. In 2011, our very first harvest was picked, selling out on release in 2014. Now we have over 24 acres under cultivation, making three delicious wines, on the chalky south facing slopes above the beautiful Dorset village of Litton Cheney.” 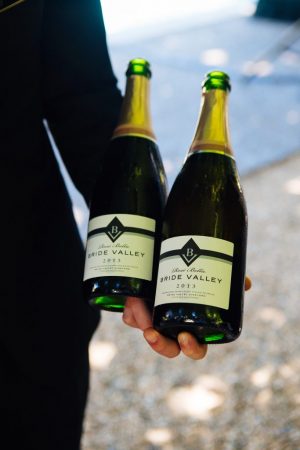 Boisset Collection is the exclusive importer of Bride Valley English Sparkling wines and will officially launch the brand to the U.S. market in January 2017.  The Bride Valley Blanc de Blancs 2013 is selling for $75 and is currently only available in very limited supply at the Raymond Vineyards tasting room.

Spurrier’s Bride Valley vineyard consists of 42,000 vines planted on over 24 acres, with 55% planted to Chardonnay, 25% to Pinot Noir, and 20% to Pinot Meunier.  The vines are close-planted on mostly south facing slops in the bowl of their 200 acre farm on South Dorset’s Jurassic Coast, near to Kimmeridge, the name of Champagne’s own chalk-based soils.

The 2013 Blanc de Blancs sparkling wine was fermented in temperature controlled stainless steel tanks and underwent malolactic fermentation to give it roundness and balance. A crystal clear Blanc de Blancs that shows the chalky soil and freshness from a light vintage, and very young vines. The palate is fruity with hints of brioche, a lean citrus edge on the palate with fine mousse and racy acidity.