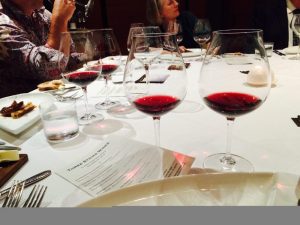 Three Sticks Winery Meets The Plumed Horse By: Laura Ness Walking through the doors of The Plumed Horse, Saratoga’s only Michelin-starred restaurant transports you to a world apart. First, there’s the top-drawer service: an immediate greeting, polite, but friendly. Then, there’s the trippy underground wine storage cellar visible through a glass floor that will give you vertigo. And best of all, there’s the food.

This is not blow-dried, reconstituted duck marshmallow puffs or vegetables deconstructed to the elements of a periodic chart. No, it is gastronomic excellence with recognizable ingredients and satisfying flavors. It’s what Chef Peter Armellino does. 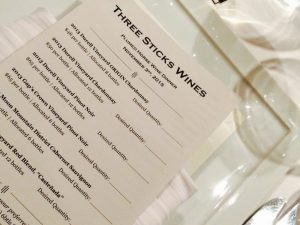 A current home run staple is the black pepper and parmesan soufflé served with a Dungeness crab and uni fondue/bisque: just the right amount of rich. This was served as the first course of a winemaker dinner featuring Three Sticks Wines.

The dish proved a natural for Chardonnay, with and without oak. We enjoyed both the 2013 Three Sticks Durell Vineyard ORIGIN Chardonnay, done in a concrete egg, a succulent blend of crustless apple pie and mango custard, and the 2013 Durell Vineyard barrel-fermented Chardonnay, which saw 15 months of wood, and comes on with a lemony crème brulee texture. Both were splendid compliments to the dish. 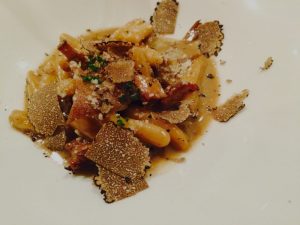 Three Sticks Wines, owned by Bill Price, and starring several vineyards that are near and dear to wine aficionados, namely Durell, Gap’s Crown and Moon Mountain. Price’s name might ring a bell if you’ve worshiped at the altar of Kosta Browne or Kistler, both of whom happen to be investments of Price’s. He was also an investor in Chateau Saint Jean, Gary Farrel and LUTUM. The man is not limited in taste or vision, or a sense of humor. Three Sticks is a fun play on a nickname he earned while going to high school in Hawaii. With a long name ending in a III, and a penchant for surfing that he still indulges to this day, his compadres called him “Billy Three Sticks.” He’s an easy to love personality, and an acute businessman. 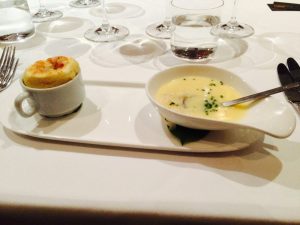 Durell Vineyards, a 135-acre plot that was part of the original 400-acre vineyard planted in 1979 by Ed Durell, was purchased by Price and his former wife, Ellie, in 1997. It’s the estate vineyard for Three Sticks. Mostly Pinot and Chardonnay, it is highly unusual in that spans three AVAs: Sonoma Coast, Sonoma Valley and Carneros. Ellie still owns part of the Durell Vineyard, and makes wines, along with Chris Towt, under the Dunstan label.

When making a list of the vineyards you want represented in your private Pinot collection, you’d definitely want something from Durell, as do some two dozen other wineries, among them Dunstan, Kistler, Lioco, Loring Wine Co., Pali and Saxon Brown. Bill Price created Three Sticks in 2002 to focus on wines from Durell as well as other boutique vineyards in places like the Santa Rita Hills.

But, in 2013, perhaps as an effort to outdo himself, Price also acquired another Sonoma Coast vineyard, one that had already achieved mythical status, Gap’s Crown. This coastally influenced, fog-laden piece of Burgundian grape-growing heaven, consists of 406 acres, of which 138 are planted to vines. 106 acres are Pinot Noir and 32 are Chardonnay, in what seems to be a hugely disproportionate slight to the Queen of whites, made most assuredly in the Court of Economics.

The original winemaker for Three Sticks Wines (since 2004) was Don Van Staaveren, the former winemaker of Chateau St. Jean (1985 to 1997), Sand Hill and Dunstan. He serves as Winemaker Emeritus and will continue to make the Cabernet for Three Sticks going forward. Current winemaker, Bob Cabral (Williams Seylem) and assistant winemaker, Ryan Prichard, will craft the Burgundian component of the portfolio. They produce a little over 3k cases, sold primarily through allocation to a limited mailing list.

The Price’s recently purchased (2012) and restored an old adobe in downtown Sonoma, the historic Vallejo-Casteñada Adobe, one of the town’s few remaining buildings from California’s Mexican Period. With architectural guidance from renowned designer, Ken Fulk, the Adobe serves as the Three Sticks tasting salon.

We had the unique opportunity to try three wines with the second pairing, a dry aged squab served with foie gras crepe. Both the 2013 Durell Pinot and the 2013 Gap’s Crown, which are current releases, were lovely, but the 2008 Durell, showing its earthy provenance and polish of age, was the match you wanted for the richness of the squab. Between the two newbie Pinots, my preference was the Gap’s Crown for its energetic blast of raspberry, fern and juniper, driven by a bold spear of acid, while the Durell showed fresh earth, fern and a smoky, almost ashy edge.

The 2012 Cabernet Sauvignon from Moon Mountain, the newest AVA in Sonoma, was blue-fruited and blue-blooded, elegant and even-tempered, showing the sleekness of a colt you know will take to the track with an easy, yet earnest gait. It was gorgeous with Australian Kerwee beef, almost blue-red and incredibly tender, served with butternut squash, kale pesto and baby cipollini onions.

The whimsical dessert plate of Valrhona chocolate ganache, port namalaka,, chocolate “soil” and currant meringue, was arranged in a curve that looked like a wave had washed up these treasures from a forbidden sea. It complimented the ripe and impossibly fruity “Castenada Red,” made from both white and red Rhones sourced from Durell Vineyard.

Someone asked Bill about his wine cellaring philosophy. He advised buying a case and drinking a bottle or two a year, speeding up or slowing down, depending on the wine’s evolution. This means he drinks quite a lot of Chardonnay and Pinot. “Whenever I come across a Syrah,” he admits, “I put it in the back of the cellar. I figure my kids will enjoy it.”

“Whenever I come across a Syrah. I put it in the back of the cellar. I figure my kids will enjoy it.”

Visit the beautiful and historic Three Sticks tasting room in downtown Sonoma for food pairings and wine tasting by appointment daily. Put The Plumed Horse on your bucket list again, even if you’ve already been. Life is too short.