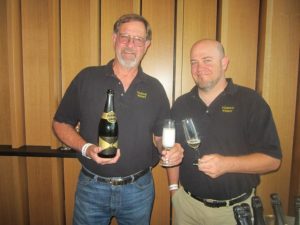 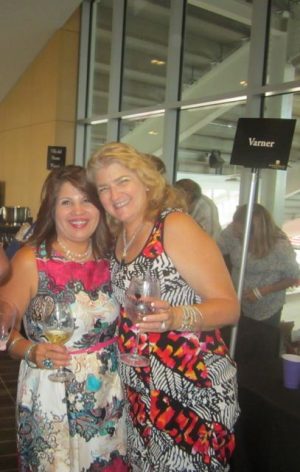 The Grand Tasting, which took place in the Levi’s 501 Club overlooking the field which was being prepped for the Grateful Dead concert, featured 52 wineries, all from the Santa Cruz Mountains. The Club is adorned with a collection of Levi’s jeans from different eras hanging from the walls, each previously worn by a live model/victim, whose shape is forever imbued into the dangling denim. We got to meet one of the models, the fun-loving David Page of La Honda Winery, who poses here with his lost pants. His Pinots are pretty fetching, too.


There was so much wine and so very little time, I skipped the big names that everyone else went rushing to like sheep and instead concentrated on finding new hidden gems. Here are ten wines from the Santa Cruz Mountains you shouldn’t miss. 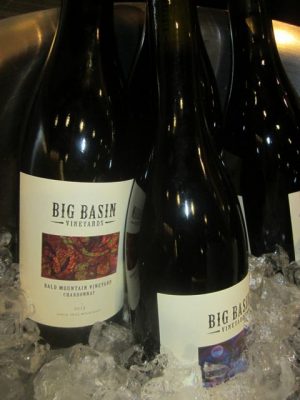 2013 Big Basin Vineyards Chardonnay, Bald Mountain: From a truly special and unique site in the Santa Cruz Mountains farmed by Ryan and Jim Beauregard, comes this lush, clean wine fermented in neutral oak. It’s all about crisp Asian pears, juicy apples and a silky, divine texture. Very limited and worth every penny.

2012 Bottle Jack Winery Zinfandel, Zayante Vineyard: This superbly situated site on west facing slopes in the Santa Cruz Mountains, is the source of seriously excellent Zin and Syrah. Winemaker John Ritchey nailed this one beautifully, delivering a bright, red-fruited zinger of a wine that garnered him 98 points and a Best Microwinery Red at the 2015 California State Fair.

2011 Cooper-Garrod Cabernet Franc Estate: This Saratoga site is renowned for Cabernet Franc, and this vintage is an excellent example of how the Santa Cruz Mountains can deliver a kick-ass wine laced with an intriguing combo of roasted Shisito peppers and raspberry chile jam. Super smooth finish and just-right tannins.

Equinox NV Monterey Blanc de Blanc: Get some of this for all your sparkling needs. It’s delightfully dry, yet oozes all the charm of crisp apple pie with crumb topping. Champagne master, Barry Jackson, also impressed us with the 2001 Blanc de Blanc Extended Tirage, Santa Cruz Mountains, a champagne-dead ringer packed with yeasty richness, yet dry and toasty with a lingering finish of brioche.

Visit Barry in Santa Cruz’s “wine ghetto,” a collection of tasting rooms on Swift Street on the west side. He features oysters on Thursdays from 3:30 til as late as 7 pm. 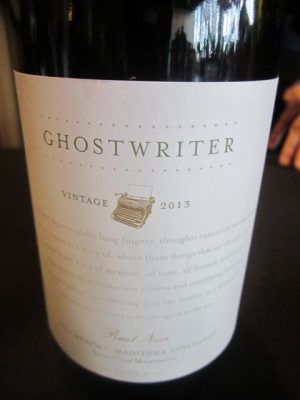 2012 Ghostwriter Pinot Noir, Ahlgren & Mount Madonna Vineyards: This outstanding co-ferment of Pinots from two distinctive sites delivers classic Pinot aromas and flavors. Bright, dynamic, spicy, ferny and plump in the middle, this is a wine that will age gracefully. Winemaker Kenny Likitprakong, is now managing the Ahlgren Vineyard in Boulder Creek, where the vines were planted long ago to an unknown collection of clones. One can only guess.

2007 Kings Mountain Vineyards Meritage: A big boy of a Bordeaux blend, this massive Cabernet-based beast is all tar, leather, tobacco and lurking cassis. It’s a wine for the decades. Procure some now, if you like your wines assertive and muscular. After the 2008 vintage, the vines at this Woodside site were all grafted to Pinot. Purchase from their website.

2013 Mindego Ridge Chardonnay, Los Altos Hills: From a 10-acre site 8 miles from the coast, this delightfully silky wine gets its stuffing from being whole-cluster pressed directly into 15% new, 70% neutral French oak and 15% stainless steel. It was stirred on the yeast for 11 months. Delicious aromas and flavors of Gravenstein apple turnovers topped with toasted almond ice cream make this an easy wine to love. Purchase online at mindegoridge.com

2014 Sante Arcangeli Corralitos Rose of Pinot Noir: As graceful as a spring sunrise and just as pale pink, this strawberry watermelon delight is the perfect wine for all your summer afternoons. Chances are, there won’t be any this vintage, as the shatter is so bad in the vineyards from whence this wine came. So snap it up along with all the Sante Arcangeli wines. The tasting room is open weekends in Pescadero.

2013 Varner Chardonnay, Amphitheater Block, Spring Ridge Vineyard: Although all three of the Varner Chardonnays were impressive, this one hit the sweet spot, with just the right amount of oak for the amply round core that shows classic stone fruit, just ripe pineapple and citrus zest. Overall, it gives the impression of a French pastry with white peaches, crème fraiche and lemon cream. At nearly $600 per case, this is heady stuff, but it sure would be fun to lay a few bottles down for a decade or so. The Varner brothers also have a brand called Foxglove, which features Chardonnay, Zin and Cabernet in the $186/case range. Nice of them to accommodate “the rest of us.”