What is Chianti Classico?

When I told my husband that I had been invited as a guest to travel in Tuscany to report on the Chianti Classico wine region in Italy, he said; “What do you mean, I thought Chianti was a bottle of wine not a wine region?” This got me thinking. My husband drinks more wine than the average Joe or Jane wine drinker (he did marry the Wine Oh after all ;)). So if he is cursed by this classic Chianti Classico vs Chianti confusion, how many other wine lovers out there are avoiding this remarkable wine region altogether at the mere mention of the C word?

“What’s in a name? That which we call a rose, By any other name would smell as sweet;” 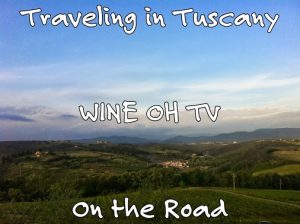 Not in this case Juliet! A rose might smell as sweet, but the name on a label of a bottle of wine can make all the difference in the world, especially when it comes to sight, smell and taste. I believe there is a wide spread Chianti Classico crises and I’m here to pull the cork on it, but I need your help! Your mission should you chose to accept it, is watch the above video and then to help your friends and even your foes decipher the different between the widely known Chianti bottle and the high quality Chianti Classico wine region. Until one day, visions of candles and grass skirts will no longer be dancing in people’s heads. Instead a proud Black Rooster will be strutting his stuff and cock-a-doodle-dooing at first thought of the Tuscan wine region. 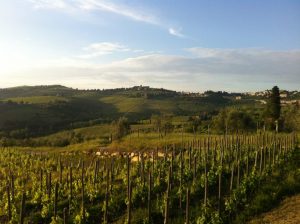 Where did this misconception come from? How is it that so many wine know-it-all’s and novices don’t know that Chianti Classico is in fact an amazing wine region and not a tacky bottom heavy bottle? Established in 1716, Chianti Classico is Italy’s oldest wine region and produces some of the best wines at an extremely fair price. So why is it that people can’t seem to get it straight? Is mainstream media to blame? I’m pretty sure we can’t point the finger at Marilyn Manson or South Park creators Trey Parker and Matt Stone for this one. However, we can look to Disney’s Lady and the Tramp, Sherlock Holmes and even A Room with a View, shows a salesman trying to pawn off the basket bottles to tourists.

This is the first in a series of videos I’m producing highlighting my recent trip to Tuscany: Traveling in Tuscany: Uncorking Chianti Classico. I hope to help you learn and better understand what Chianti Classico IS, before we meet the amazing men and women behind the wine bottles. 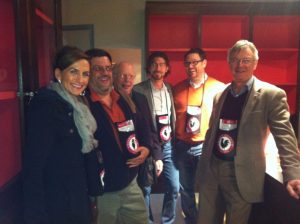 I traveled to Tuscany with five notable male wine experts and wine bloggers. This was my first time traveling with all guys, but luckily for me I had recently read Sheryl Sandberg’s Lean In. In an effort to make Mrs. Facebook proud I did my best to sit at the table both literally and figuratively! During our visit to the rural and rolling hills of Tuscany, we were invited to attend the Chianti Classico Experience. The Chianti Classico Experience is 10 days of wine and food events, seminars, tastings, excursions, and games to get acquainted with Chianti Classico producers and their beautiful territory. Early on in the trip the guys affectionately dubbed me The Principessa. Then I looked around at the gang tweeting on their tiny iPhone’s and rapidly writing on their miniature notepads and looked at down at my tripod, camera, batteries, lights, make-up, hair spray, lip gloss and the 50 pounds of gear strapped to my back and said I’m more like the Sherpa than the Principessa. For the rest of our adventure under the Tuscan sun and sunset, I would be known as the Sherpa Principessa.

After I got back from Italy, I went to my local Ristorante Italiano with a group of non wine expert friends. The waiter came by the table to take our wine order and he said, “We have Malbec, Cabernet, and Chianti by the glass.” I replied, “Is it Chianti or Chianti Classico?”He responded “Chianti Classico” with a big smile and I shouted “Grazie! Chianti Classico’s all around!” Then my friends turned to me and with confused looks on their faces said “What’s the difference?” Then the Sherpa Principessa immediately started in on her spiel. 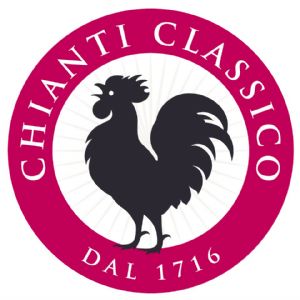 Wine Advice from the Sherpa Principessa

“If you don’t see the Black Rooster on the bottle it’s time to fly the coop!” 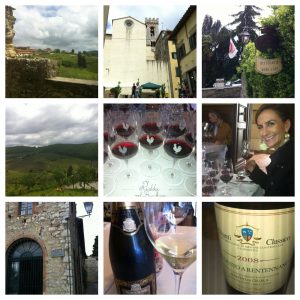 Stay tuned for my next video where our Chianti Classico experience continues. We attended wine tasting events and festivals, and visited restaurants in the villages of Radda, San Leonino, and Greve in Chianti, among others. We visited to the new Antinori Winery in Chianti Classico, got up-close and personal with the Mazzei Family at Castello di Fonterutoli, and dined with Mr. Meat himself, Dario Cecchini, also known as “The Butcher.” Cecchini is famous for his butchery and theatrics in his own right, but he is also renowned for mentoring Star Chef Mario Batali as well as Batali’s father.

Thank you to the Consorzio Vino Chianti Classico and Balzac Communications for sponsoring my first trip to Tuscany and making it possible for me to share what I learned with all of you!