Trick to Trellising: The Story Behind the Vine 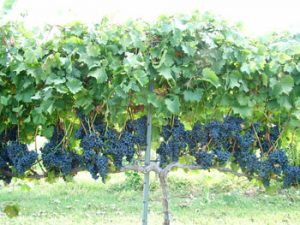 Sipping wine next to dozens of rows of fruiting grapes, flowing over hillsides like waves, takes any visitor away on a journey of tranquility. Taking a closer look, you might notice that these seemingly endless lines are not one solid body, but individual grapevines put together like a puzzle, trellised together to create the bigger picture.

Grapevines have always been trellised on their own, even before they were trellised by man. Grapevines are hardy adapters to their environments, originally sprawling on the ground, looking for any tree available that they could wind up like a snake. Wrapping their tendrils around each branch, their aim was for sun. Every fall, vines would bless all the birds with perfect, bright colored, sweet fruit on tree tops away from predators. Enticing the birds, the grapevines knew they needed them for their survival. Wherever the bird landed next, a seed most doubly would be deposited.

As time passed, so did advances in winemaking and the farming of grapevines. Decade after decade, winemaker’s watched steadfastly as vines twisted and turned around any apparatus that the vines were attached too. Vine arms (cordons) would be mounted onto stakes and wired into many different directions and styles. Each harvest, the winemaker most undoubtedly noted the differences between the quantity and quality of the fruit brought in to be processed into wine.

Today, more than a few dozen different trellis system are in use, all created and adapted to the environment to which the grapes grows, and type of production that the grape is intended for. Listed below, are the most innovative grapevine trellising systems used worldwide today. Each picture below tells the story of innovation and beauty, as well as adaptation to the specific climate and region of the grapevine. Next time you visit wine country, take a look at not only the scenery, but also the individual grapevine, as it can tell you a great deal about what is in your glass. 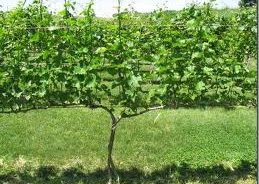 VSP (Vertical Shoot Positioning): The most commonly seen trellising system in new world wine regions, easily harvested mechanically or by hand, it can be adjusted to vines intended for quantity or quality. 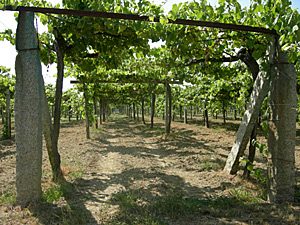 Pergola: Used in countries that have a high amount of humidity, such as Uruguay, Spain and Asia, it can utilize valuable land as crops can be planted underneath during alternative harvest seasons. 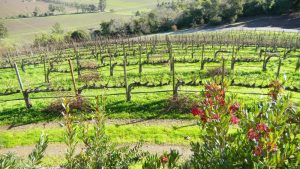 Guyot: This trellis system can be found in high-end properties in Napa, as well as in Bordeaux. In Bordeaux, the vines are no taller than a knee-height, providing the grapevine with warmth that radiates from the stony soil beneath. 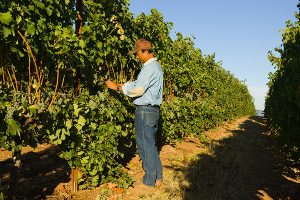 Smart-Dyson: Often used in organic vineyards that don’t allow sulfites to be spayed for must. The trellising allows for maximum sun penetration keeping mold away. The grapevine has upward and downward alternating trained vines (shoots). 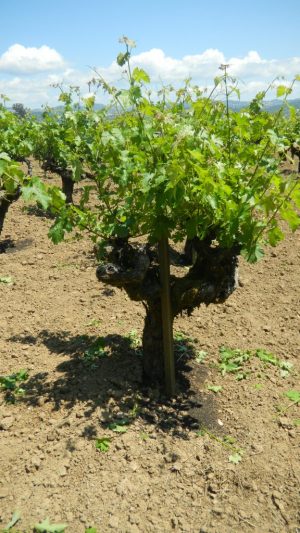 Gobelet: Free-standing or supported by stakes, these systems were mostly likely used by ancient Egyptians and Romans and are best suitable for older or low vigor vines. 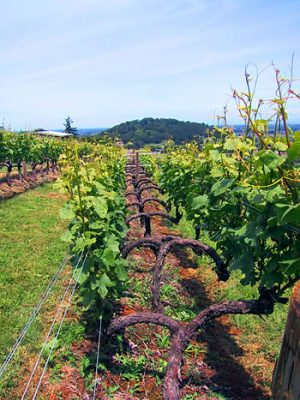 Lyre: More commonly used in new world wine regions, these allow for good sunlight and air, and are more suitable for vines of mass production. 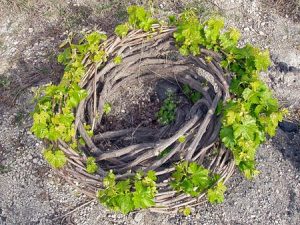 Stefani: These clever little grapevine trellising systems where developed to withstand the strong winds coming out from the Aegean sea on Santorini, Greece. The grapes grow on the inside of these baskets created by the vines themselves, protecting them from the wind and allowing for adequate sunshine.