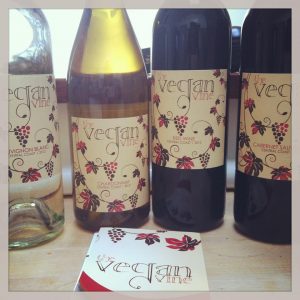 While Thanksgiving is widely known as Turkey Day, there are many people who will bypassing the T in T-Day and going straight for the V. So how do you feed your vegan friends and family members on the most important meal of the year? Here are a few fabulous Vegan Thanksgiving Recipes & Vegan Wine Pairings that will leave your meat eating and non meat eating guests lining up for leftovers.

These Thanksgiving vegan recipes are the creation of Brenda LaChance Murphy, a gourmet cook who has been entertaining for decades. As a co-owner of Clos LaChance winery, founded in 1992, she directs the daily operations of a 150-acre estate vineyard in San Martin, CA and the nearby Santa Cruz Mountains. Brenda frequently shows her namesake wines at local gourmet stores, talking food and wine with other enthusiasts, and creates recipes for the winery’s staff and customers. In 2011, Clos LaChance debuted The Vegan Vine, a line of wines made entirely without animal products, and Brenda began exploring vegan cuisine and vegan food/wine pairings.

A little oil for brushing

Preheat the oven to 425°F. Line a small baking sheet with parchment paper.

Cut the Delicata in two lengthwise and carefully scoop out the seeds to make four long ‘boats.’ If the boats are too wobbly, take a very thin slice off of the bottom so they’ll sit flat. Brush with oil and roast in the oven until they are soft and just starting to char a little, about 30-40 minutes.

In a large frying pan sauté the onion in grapeseed oil until soft and just starting to turn brown. While the onions are cooking, clean the mushrooms and chop them somewhat finely (into chickpea-sized pieces). When the onions are ready, raise the heat and add the mushrooms all at once. Spread them out so that they make as much contact with the hot pan as possible. You may need a little more oil at this point.

When the mushrooms start to take on some color, stir them around a bit until they are browned and cooked through. Turn off the heat and stir in the minced garlic. There should be enough heat left in the pan to start to cook the garlic. After about a minute, add the soy sauce, which should deglaze the pan, again with any residual heat. If the pan has cooled too much, bring the flame to low and scrape the bottom for any brown bits.

When the pan is dry and all the soy sauce absorbed, add the farro, nuts, and dried cranberries and stir to combine. Taste for seasonings: it should be salty enough from the soy sauce, but be sure to add several grindings of pepper. Stir in half the fresh herbs and again taste, adding more herbs or pepper as needed.

Remove the Delicata boats from the oven, leaving the oven on. Using a soup spoon, fill the boats with the farro mixture, pressing lightly to pack them full and mound the filling slightly. Return to the oven to heat everything through, about 8 to 10 minutes. Place on a serving platter, sprinkle with remaining herbs and optional smoked paprika, and serve hot. If there is stuffing left, serve it on the side in a bowl, or reheat it the next day as a part of the leftover feast.

• Be sure that your dried cranberries aren’t too sweet. They’re there to counter the sweetness of the fried onions and squash.

• You can use other nuts besides pecans, such as walnuts, hazelnuts, or a mixture of the three.

• I find that the flavors are complex enough here, making fancy mushrooms a bit of a waste, but if you want to splurge a little you could try fresh shiitake mushrooms.

• Fresh herbs are important to add brightness to this rich, savory dish. Dried herbs can be used (such as a teaspoon or two of dried sage and thyme) if fresh aren’t available.

• You can also use 1 cup of cooked brown rice instead of farro. Add a small amount of Vegan Vine Cabernet Sauvignon to the cooking liquid.

• If you like a heat, crumble in a dried chile.

• Zest 1/2 an orange into the stuffing before filling the boats to add a little citrus kick.


Serves 6 as a side dish

1 medium onion (yellow or red, per your preference)

Salt and pepper to taste

4 to 5 tablespoons of olive oil, plus more to taste

Quarter and thinly slice the onion thinly. Dice all other vegetables into half-inch or smaller pieces. Place the vegetables into a baking dish, several inches deep, and coat with oil. Season with salt, pepper and herbs. Toss gently to distribute seasonings. Roast 45 minutes to an hour, removing halfway through to stir gently so that the vegetables on the bottom come to the top. Stir again towards the end of the cooking process. Remove from the oven and let cool slightly. Check for seasoning and serve.

*Feel free to substitute and change out vegetables according to your tastes. Other great options are squash, Brussels sprouts, and thick asparagus.

Serves 6 as a side dish

3/4 teaspoon salt (plus more for the water)

Peel potatoes and cut potatoes into chunks about 1 1/2 inch thick. Add to pot and add enough cold water to cover. Add about a teaspoon of salt to the water. Cover and bring to a boil.

Once the pot is boiling, reduce heat to a simmer and cook for about 12 minutes until fork tender. Drain potatoes, then place back in the pot

Do a preliminary mash with a potato masher, just to get them broken up. Add milk, oil, salt, and pepper and mash until fluffy, adding more almond milk, as needed. Taste for salt and pepper and serve.

• Almond milk should be at room temperature before using.

• Make sure almond milk is unsweetened, and plain, without any added flavors, otherwise your results will be disappointing.

• There is no need to make separate portions of mashed potatoes for vegans and non-vegans. This recipe is creamy enough to please everyone at the table.

3 1/2 cups low-sodium vegetable broth, divided (use less if you would like a thicker gravy)

In a large skillet over medium-high heat, bring 1/2 cup of broth to a simmer. Add onion and garlic and cook until onion is soft and translucent, about four to five minutes. Stir in mushrooms, rosemary, and thyme. Cook about 2 minutes or until mushrooms release their liquid and start to become tender. Add wine and cook 1 minute, stirring constantly. Add remaining 3 cups broth and bring back to a simmer.

Meanwhile, in a small bowl, whisk together tamari, nutritional yeast and corn starch until it forms a thick paste. Slowly add to skillet, about 1 teaspoon at a time, whisking constantly until paste dissolves. Bring to a boil and boil 1 minute, stirring constantly. Finish with pepper.