Vacation in Venice & a Taste of Trentino, Italy 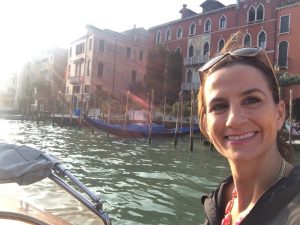 A Venetian vacation either sounds like a dream come true or a nightmare tourist trap. Venice was built entirely on water and survived well into the 21st Century without cars. Today, it’s one of the largest care free areas in the world.

Wading your way through this uniquely romantic and exciting city isn’t for the faint of heart. Venture off the well-beaten trails and into the backstreets to find where Venice’s true treasures lie. 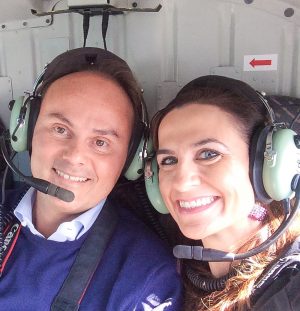 In addition to visiting Venice, Wine Oh TV’s Monique Soltani travels about two hours from Venice, Italy to visit the Trentino wine region in Northern Italy. It’s there where she gets to the bottom of Trentodoc’s fresh, affordable and food friendly bubbly.

This is the second video of a three part video series reporting from Northern Italy. In our first video, Monique Soltani met with the family behind Ferrari wines who found a secret weapon to global warming.

In the second video above, we take a trip to Venice, Italy and the Trentino wine region to learn about the wines from Trentodoc. In our third and final video (coming soon), we get up close and personal with the Lunelli family the face behind Ferrari wines.

The capital of Trentino is the city of Trento which sits near the Adige river and was home to the Council of Trent. Trento is located in the foothills of the Alps. The top sight to see in Trento is the Duomo, a Romanesque Gothic cathedral of the 12th and 13th century. Giulio Ferrari brought sparkling wine to this Italian wine region over a century ago. Today there more more than 40 producers in Trentodoc. From the mild Lake Garda to the biting cold of the Dolomites, the wide variation of temperatures in Trentino help define the character of Trentodoc wine. 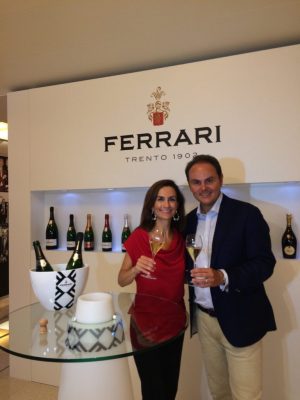 The grapes grown in this part of Northern Italy are Chardonnay, Pinot Noir, Pinot Meunier and Pinot Blanc. Giulio Ferrari was the first person to bring the Chardonnay grape to Italy well over one hundred years ago. Ferrari gained winemaking experience in the French Champagne producing village of Épernay.


TrentoDOC has more rigorous requirements than Methodo Claissico or Méthode Champenoise: The wine has to be made using techniques characteristic of the region, including how the vines are planted, cultivated, pruned, and hand-harvested. Forcing is not permitted, irrigation is allowed only as an emergency measure, maximum vine yield is 150 q.l. per hectare for all varietals, and maximum grape yield is 70%. The wines must rest for a minimum of 15 months on their lees for non-vintage, 24 months for vintage, and 36 for riserva. Minimum alcohol content must be 11.5%, or 12% for riserva. Thus ensuring Trento DOC on the label means the wine is of the highest quality and made using these very strict standards.

Monique Soltani: With its awe inspiring art, historical ruins, and fabulous food and wine, Italy is a top travel destination that tourists like me return to again and again.

From the canals of Venice to wine making in the mountains, our Italian adventure begins today. Word on the street is it’s Clooney’s wedding this weekend. Clooney Wedding Watch 2014 in Full effect.

Federico Zanuso: It’s not a new thing for Venice, because this place has always been the center of a shooting war, so to speak.

Monique Soltani: With its dream like canals, architectural marvels, and rich history dating back to the fifth century, it’s no wonder that this wonderland, at only five square kilometers, is one of the most popular tourist destinations in the world and some would say the most important.

Federico Zanuso: It is definitely a school by itself, because many centuries starting from the middle age, made Venice what it is, one of the most important cultural attractions of the world.

Monique Soltani: An embarrassment of riches, the entire city along with its lagoon is listed as a World Heritage Site. Venice was built entirely on water. So, it’s true, in Venice there are no cars, only boats.

Federico Zanuso: No cars at all. This is the last place you can reach by car. From here, it’s only walking or just Vaporetto’s you can see on canal rides. That’s the way to move in Venice.

Monique Soltani: Unmasking the mystery of Venice is easy enough if you know your way around this open air museum. The first stop, once you set foot on the island, has got to be Saint Mark’s Square, or Piazza San Marco. It’s the heart of Venice and best to visit late in the evening or very early in the morning. Palazzo Ducale, or the Doge’s Palace, used to be the residence of the supreme authority, the Doge, until the fall of the republic in 1797.

Next stop, Saint Mark’s Basilica, one of the few religious buildings not meant entirely for worship. Designed and built for one purpose only, to contain the body of Saint Mark, and it’s the second highest building in Venice. What’s the first? Saint Mark’s Campanile, one of the most recognizable symbols of the city, originally used as a watchtower. Whether you walk across it or ride under it, the Rialto Bridge is not to be missed.

Federico Zanuso: The Ponte di Rialto is one of the most important monuments here in Venice. This bridge is 500 years old. As you can see, all the motorboats have to drive carefully. You can see on your right a very important building. This is the fish market.

Monique Soltani: Why is it so important, the fish market?

Monique Soltani: For lunch, live it up like the locals do and spend the afternoon on an epicurean adventure in search of ciccheti, Venetians’ take on tapas. Bacari, or Venetian bars, serve up the bite-sized snacks that are priced just right at around 1 to 3 euros each. Every year, 20 million people visit the sinking city, yet only 60,000 Italians call Venice home. Venetians are vanishing, yet this well preserved treasure is anchored with art, history, culture, and cuisine.

Monique Soltani: Just two hours north of Venice, Italy, you’ll find Trentino, a region with a wine making tradition that dates back to 3000 B.C.E. With a history that started back in the Stone Age, Trentino Alto Adige is Italy’s northern most wine region, located on the Italian-Austrian border. In the 14th century, this Italian region was under the Austrian rule.

Trento Tour Guide: We have both Italian culture, so Italian art but also German influences. This is very particular and very difficult to find in any other city in Italy.

Monique Soltani: If sparkling wine makes you feel divine, then you’ve come to the right place. We’re in northern Italy giving you a bird’s eye view of the Trentino wine region. They make some amazing sparkling wines. Here’s why. Set at the foot of the Alps, the mountain micro climates help Trento DOC make the best bottle of bubbly.

Matteo Lunelli: Trento DOC is a bottle fermented sparkling wine made with chardonnay, pinot noir, pinot meunier, or pinot bianco grape from the province of Trentino. What makes it unique is our territory and the mountains of Trentino. We cultivate the grapes on sloping vineyards at high altitude. This is the secret of the freshness, finesse, and elegance of Trento DOC, the secret of its longevity.

Sabrina Schench: Trento DOC doc was the first DOC appellation established in Italy for champagne or wine and the second worldwide after champagne. The history of Trento DOC began with the wine maker Giulio Ferrari that had the great intuition to understand champagne and Trentino could have some similarities.

Monique Soltani: Giulio Ferrari brought the sparkling wine tradition to Trentino over a century ago.

Matteo Lunelli: The history of Ferrari starts in 1902, and it starts from a dream of a man called Giulio Ferrari. Giulio Ferrari created a small winery in the center of Trento a few hundred meters from the cathedral of Trento. And he wanted to create an outstanding bottle fermented sparkling wine with chardonnay and pinot noir grapes coming from his own land of Trentino. He had the great intuition because he understood that the territory of Trentino would have been a perfect land to grow chardonnay and pinot noir for a bottle fermented sparkling wine. From this dream and from this intuition everything started.

Monique Soltani: He really was the first person to bring chardonnay to Italy, correct?

Matteo Lunelli: Absolutely. He is considered the man who really spread chardonnay all over Italy. Nowadays, you can find chardonnay from Trentino to Sicily. But he has been the first one really to bring chardonnay into Italy and to spread it around.

Monique Soltani: A lot of times, people think Italian sparkling wine, and immediately they just think Prosecco, at least in the United States. Talk about the difference.

Matteo Lunelli: Prosecco is a metodo Charmat. So, the second fermentation happens in a stainless steel vats. In Trento DOC and in Ferrari, the second fermentation happens in the bottle. It is a metodo classico. It is a process that is much longer. Prosecco is a beautifully aromatic, fresh, fruity sparkling wine, but the metodo classico in the Trento DOC wants to be the pinnacle of sparkling wine production in Italy, because metodo classico can deliver higher complexity, higher elegance.

Monique Soltani: Absolutely. Well, it’s been a great pleasure for me to be here. Cheers to you. Cheers to Ferrari.

Matteo Lunelli: Cheers to you. Let’s toast to the passion for wine in general.