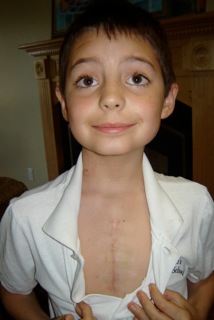 When 11 year old Colby Groom asked his Dad if the two could team up to make a wine together, neither father nor son could predict the outcome of their success. In just a few years, their wine Colby Red has been featured on wine lists across the country, got rav reviews from the Today Show team with gal pals Kathie Lee & Hoda leading the charge, and it’s safe to say this pint sized winemaker has literally stole the heart of a nation. Colby Red could be selling well because it tastes great, is priced right (around $12 a bottle), or because the wine literally has heart. Most people buy wine because a few glasses makes them feel good (or even giddy at times), but drinking this wine won’t just raise your spirits it will fuel your soul.

In this wine video, Wine Oh TV’s Monique Soltani headed to Healdsburg on March 30, 2014, to witness a huge milestone for Colby Red and the entire Groom family. We were on hand as they celebrated reaching $500,000 in donations to heart-health charities from sales of their wine brand Colby Red. The Groom family has made donations to the American Heart Association, the UCSD cardiology research department and numerous kids’ heart camps across the country, as well as to many other organizations supporting heart research and awareness and providing financial and emotional support for families battling heart disease. 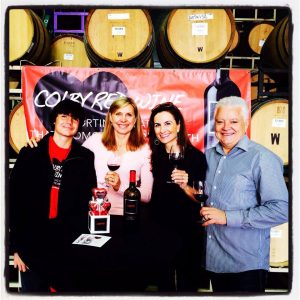 Three years ago, after two open-heart surgeries, young Colby pushed his dad to create a wine brand to give back to all the organizations that had helped him survive. Sales of Colby Red have blown away expectations, and the brand is exploding around the country now with 35,000 cases in production.

Many of us spend our days hoping to do good, thinking one day we will make a difference, I challenge you to make that day today. To learn from this 16 year old’s success story. Whether you share this video with your friends, buy a case of Colby Red, or go out and volunteer with your charity of choice. Giving back can be taken in small steps or in Colby’s case leaps and bounds. As Mahatma Gandhi so eloquently put it “Be the change that you wish to see in the world.”

“We feel incredibly blessed to have so many supporters that want to help this great cause. Wouldn’t it be great if we could get the whole industry behind it and really make a difference. The wine and food industry and my family could be donating $1 million a year to heart charities in the future!”

Daryl Groom, internationally acclaimed winemaker who has received acknowledgement as Winemaker of the Year in the Los Angeles Times, San Francisco Chronicle, Dallas Morning News and Houston Chronicle. It may have been recognition from Food and Wine magazine as “One of 11 Visionaries to Change the World of Wine” that foretold that Daryl and his son would find greater purpose in making wine.

Colby Groom, now 16 years old and a high school junior in Healdsburg, is a seasoned volunteer with the American Heart Association. He also attends market-by-market fundraisers featuring Colby Red wine. Colby is a natural on stage, telling his story and encouraging guests to raise their paddles and donate to help other kids like him. Colby has helped charities raise another $1 to $2 million over the last three years.

Colby Red, Daryl and Colby together make the California cuvée of Cabernet Sauvignon, Zinfandel, Shiraz, Merlot and Petite Sirah. Proceeds from sales of the wine, priced at $12.99 per bottle, go to organizations all over the United States that support heart health. In November 2013, Colby Red and Truett-Hurst Inc. partnered to support the growth and impact of the brand, as well as to match Groom family donations to heart health.