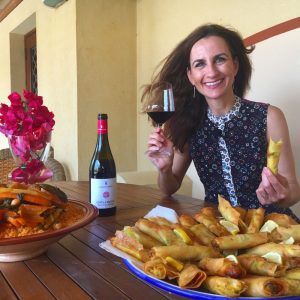 Hailed as the highest awards for creators, producers, hosts, and directors of Lifestyle Programs, Series, Shows & Cinema. Also known as the Tasty Awards, they are the premier broadcast awards show celebrating the year’s best achievements in Food, Fashion, Health, Travel, Sports and Lifestyle programs on Television, in Film, in Online Video, and in Apps, Radio, Podcasts and Photography.

“Congratulations to Monique and Wine Oh TV,” said Comcast NBCUniversal Content and Programming Manager, Barry Watts. “We are very proud to be able to partner with her and the show and wish her continued success. This is a testament to what hard work, perseverance and passion can accomplish, well done Monique!”

Wine Oh TV will be honored at the star-studded TASTE AWARDS ceremony on Monday April 9, 2018, in Los Angeles. Wine Oh TV is also a finalist for BEST DRINK OR BEVERAGE PROGRAM ONLINE and BEST SINGLE TOPIC SERIES, and will find out those results along with the rest of the award-winners at the red carpet event next month. A full list of The Taste Awards Winners and Nominees can be found HERE.

“It’s a huge honor to be recognized for the hard work and dedication that goes into hosting and producing Wine Oh TV, a show that I love and have put my heart and soul into for so many years,” said Wine Oh TV’s Monique Soltani. “I’m so thankful to the TASTE AWARDS for this honor and for bringing awareness to independently run shows like mine. I am beyond blessed to have such tremendous support from the wine community and from my television partners at Comcast. I’m grateful to my Italian production company partners, Granvia Società e Comunicazione and Mixis Produzioni, for helping me bring a taste of Italy to the United States. None of this would be possible without the love and support of my husband and our twin daughters.”

Wine Oh TV partnered with Xumo in November, 2016. Wine Oh TV’s channel on Xumo is available to watch on millions of smart TVs around the world. Based in Irvine, California, the joint venture of Myspace parent company Viant and Panasonic was started in 2011. Find XUMO on Channel Plus on LG, Magnavox, Panasonic, Philips, Sanyo and VIZIO smart TVs.

About Monique Soltani
Monique Soltani is an award-winning journalist with a Bachelor of Arts in Broadcast Journalism and American Studies. Monique has reported for The Weather Channel, KPIX-TV (CBS), KNTV-TV (NBC), KSEE-24 (NBC), KGTV-TV (ABC), KPVI-TV (NBC) and has worked as a producer and a radio broadcaster. Monique is an experienced emcee and parade host. She’s hosted the live broadcasts for the ​Livermore Holiday Sights and Sounds Parade, ​Fresno Christmas Parade and ​Fresno Veterans Day Parade. Monique has a certification from the Court of Master Sommeliers, is an experienced wine judge, and has interviewed at least two hundred winemakers, dozens of top chefs, and top celebrities like Jennifer Lawrence, Nicole Kidman and Kate Hudson. Monique is also a trained SAG/AFTRA actor and can be seen in various films, television shows, plays and commercials.