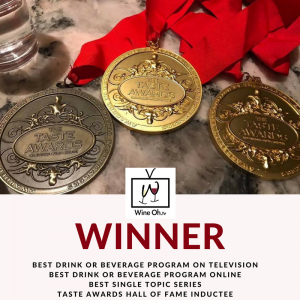 “I can’t thank you all enough for watching Wine Oh TV, being guests on the show, and for your continued encouragement,” said Wine Oh TV’s Monique Soltani. “I would also like to thank The Taste Awards for this honor, my fabulous teammates in Italy Mixis Produzioni and Granvia Società e Comunicazione and all of Wine Oh TV’s sponsors.

None of this would be possible without the love and support of my husband, Mark. It was his idea for me to turn Wine Oh TV into what it is today. His patience, positive attitude, and belief that anything is possible, has always been a great source of inspiration to me.”

The TASTE AWARDS is hailed as the highest awards for creators, producers, hosts, and directors of Lifestyle Programs, Series, Shows & Cinema. Also known as the Tasty Awards, they are the premier broadcast awards show celebrating the year’s best achievements in Food, Fashion, Health, Travel, Sports and Lifestyle programs on Television, in Film, in Online Video, and in Apps, Radio, Podcasts and Photography.

Wine Oh TV partnered with Xumo in November, 2016. Wine Oh TV’s channel on Xumo is available to watch on millions of smart TVs around the world. Based in Irvine, California, the joint venture of Myspace parent company Viant and Panasonic was started in 2011. Find XUMO on Channel Plus on LG, Magnavox, Panasonic, Philips, Sanyo and VIZIO smart TVs.

About Monique Soltani
Monique Soltani is an award-winning journalist with a Bachelor of Arts in Broadcast Journalism and American Studies. Monique has reported for The Weather Channel, KPIX-TV (CBS), KNTV-TV (NBC), KSEE-24 (NBC), KGTV-TV (ABC), KPVI-TV (NBC) and has worked as a producer and a radio broadcaster. Monique is an experienced emcee and parade host. She’s hosted the live broadcasts for the ​Livermore Holiday Sights and Sounds Parade, ​Fresno Christmas Parade and ​Fresno Veterans Day Parade. Monique has a certification from the Court of Master Sommeliers, is an experienced wine judge, and has interviewed at least two hundred winemakers, dozens of top chefs, and top celebrities like Jennifer Lawrence, Nicole Kidman and Kate Hudson. Monique is also a trained SAG/AFTRA actor and can be seen in various films, television shows, plays and commercials.