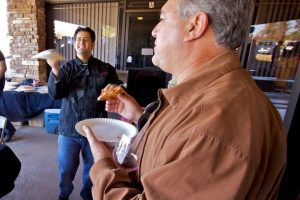 Nottingham Cellars and Ken’s Wood Fired Pizza are teaming up for an evening of Pizza and Wine in the Cellar. Ken has been in the pizza industry since 1993 when he started working at Pyzano’s Pizzeria in Castro Valley, CA. He learned the art of pizza making from brothers, Frank Gemignani and Tony Gemignani who would later become one of the world most renowned pizza makers. Ken earned the first of his four world titles in 1998 when he won first place for acrobatic pizza throwing at the World Pizza Games held in Las Vegas, NV. In 2005, Ken’s old friend, Tony Gemignani, asked him to join the World Pizza Champions, a new pizza team he was putting together to compete internationally at the Pizza Olympics in Salsomaggiore, Italy. Ken earned three additional world titles for pizza throwing with the World Pizza Champions and now works with the team to run the World Pizza Games in Las Vegas, NV.

Nottingham Cellars is an award winning, family owned boutique winery located in the heart of the Livermore Valley. Twenty Five Year Old Winemaker Collin Cranor took the wine world by storm in 2011 with a series of great showings at some of the country’s top wine competitions.

The evening will start with a pairing of five wines (including one surprise wine) served along side a delicious, hand tossed, wood fired pizza. As the sweet smell of dessert pizzas takes over the cellar, Ken will show off his pizza throwing skills in an acrobatic pizza routine. Guests will have an opportunity to test their pizza tossing skills learning along side the pizza Olympian.