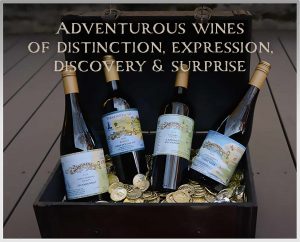 Consider the gutsiness of a move to call a line of wines “INCONCEIVABLE.” It takes hutzpah and the brass tacks to back it up. My 7th grade math teacher used this word over and over as he admonished the class for not being able to conceive of the concept of fractions.

Striking the blackboard with his exceedingly large and heavy college ring, he would intone sharply, “It is inconceivable that you cannot grasp this simple concept! This is simple math!” Sure, to him, it was. To us, well, it was pretty much inconceivable. Thankfully, we all managed to graduate, despite his dire predictions of our fraction-less, hopeless futures.

We’re guessing winemaker Blake Kuhn, who makes wines for Middleton Family Wines, had a far better time in math class. His wines all add up to something wonderful, whether they are from Santa Barbara, Washington or the isle of Sicily. He’s no stranger to winemaking, having turned out some gems for Clayhouse Wines from the Red Cedar Vineyard north of Paso Robles. 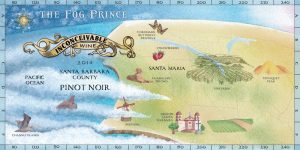 Blake graduated in 1995 from UC Santa Barbara with a degree in biology and environmental sciences, traveling the world as a field biologist before taking a job at an abalone farm and subsequently falling hard for wine while working at a waiter at Citronelle restaurant in Santa Barbara. After augmenting his wine education at UC Davis, he worked at R.H.Phillips/Toasted Head, then took the job as winemaker at Clayhouse Wines, also in the Middleton Family of Wines portfolio, in 2011.

Inconceivable wines began in 2012 to focus on wines of a place. The website features a display of the beautiful treasure map-like labels that grace each bottle. Ocean sounds play in the background, and a treasure chest filled with wines and coins beckons you on a journey of discovery.

“We imagined them, then considered our grape sourcing and winemaking, and declared them INCONCEIVABLE … and set about finding ways to make them anyway.” 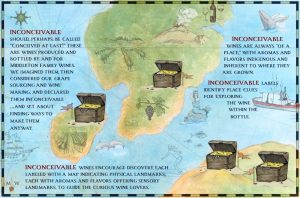 These are wines of aromas and flavors that typify their sense of place in a pretty much inconceivable way. The labels are a treasure trove of information about the wines and their birthplaces, replete with physical landmarks and historic events to that pique and fulfill the curiosity of a true wine lover’s sense of adventure.

After all, what is wine all about? Discovering how little you know and how much there is to learn. Taste on, my friends, and treat your palates to something inconceivably beautiful.

2014 Santa Barbara “Queen of Tides” Chardonnay, $25: Exotic trade winds of tropical fruit mingle with barrel and baking spices, along with enticing marzipan and honey to create a mood of sweet island tranquility. Viscous and decadent in the mouth, the racy pineapple flavors combine with refreshing seafoam salinity and lively acidity, delivering a pleasingly warm and lingering wine of presence and place.

2014 Santa Barbara County, “The Fog Prince,” Pinot Noir, $25: Kiss this frog, and a prince is sure to appear in this wine from two distinctly different vineyards, one high elevation outside of the Santa Rita Hills, the others, low elevation, just west of Los Alamos. You can clearly taste the steep terrain of the former, and the mellower vibe of the latter. This was 35% barrel-fermented in new French and 65% done in open top fermenters, with 10% whole cluster, giving it a firm backbone. It is dazzlingly purple in color, with edges of red, giving off aromas of coastal berry fields and wild rosehips basking in the wind-chased sun and kissed incessantly by fog. While rich and fleshy, with a decidedly velveteen mouthfeel, there’s a bright vein of black raspberry jelly that keeps it edgy and fresh.

2012 “Terremoto ’68,” Terre Siciliane IGT, Sicily, $25: It’s not every day that you get a screw-topped bottle of wine from Sicily, crafted from three distinct grapes grown in very different soils. Predominantly Nero d’Avola (50%) from the black soils of Gibellina in the Belice Valley of Sicily, which gives the wine its black cherry, tobacco, peppery and plummy core, this very dry and savory wine gets its spice, fine-grained, almost chalky tannin and red-fruited sour cherry from 30% Nerello Mascalese, grown in the white, limestone rich soils in the mountainous area of Salemi. From the red soil of an ancient Greek town called Selinunte, came the 20% Frappato grapes, which distinctly display their ferrous birthplace: there’s definitely a note of elemental iron in this wine that borders on the sanguine. Frappato is related to Sangiovese, and is noted for its red-fruited and lighter bodied wines. All in all, this Terre Siciliane is a very dry, concentrated wine with little acidity. It really transports you to the arid climate of Sicily, home to vines for more than 2500 years, and the largest wine-growing region in Italy.

2013 Columbia Valley “After the Floods,” Cabernet Sauvignon, $25:From half a dozen vineyards in the southeastern Washington, hails this lip-smacking Cabernet, doused with a few grape seasonings. Indeed, the composition is interesting: 88% Cab, 5% Merlot, 2% Syrah, 2% Grenache, 1% Mourvedre, 1% Cinsault, ½% Counoise and ½% Petit Verdot, all ripened to achieve generosity of fruit and intensity during a warm vintage. Packed with aromas and flavors of cherry jam, coffee, s’mores, allspice, pleasing hints of pepper and spice and firmly integrated tannins, this wine will have you saying, “It’s inconceivable that a wine could be this yummy.”

For information on acquiring these wines, call 509.525.1352 or email info@inconceivablewines.com