What Everybody Ought to Know About the All New ZAP: Zinfandel Red Wine Tasting 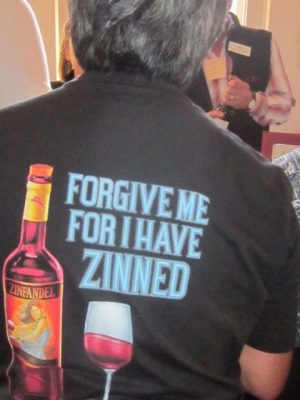 New ZAP Still Zins by Laura Ness:The t-shirt said it all: Forgive Me, For I Have Zinned. Indeed, the wearer was not the only one in the company of Zinners at Saturday’s  at the Zin Experience at the Presidio in San Francisco on a day made for Zinning.

While ZAP’s All New Zinfandel Experience was billed as a less bacchanalian successor to ZAP, this annual January festival still celebrated Zinfandel in all its incarnate glory, just a bit differently. You cannot deny the true Zin fan their opportunity to sink deep into the purple revel.

While some elements of the original ZAP remained, in particular, the individual loaves of  bread (this time baked by the affable students at the City College of SF), the real change-up was ditching Fort Mason for the Presidio, by all accounts a classier venue. Instead of having one large mega-hall where all the wineries are arranged alphabetically (more or less), interspersed with food vendors, there were three separate and equally interesting venues, each with a specific theme. 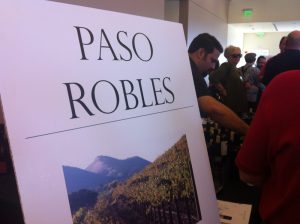 The “Terroir Tasting,” set inside the well-named Observation Post at the edge of the Presidio, was arranged by growing regions, aka AVAs. A heavily-laden table of Lodi wines beckoned with ripe, chocolatey old vine beauties replete with ample, dusty tannins. There was a well-stocked Dry Creek Valley table (Ridge, Kokomo and Mounts stood out), a fairly deep table for Amador, plus one each for Sonoma, Napa (surprisingly quite a few!), Mendocino and Lake (some really lovely stuff here), Paso Robles (fruity and concentrated) and El Dorado (classically jammy-spicy). I especially enjoyed the collection at the Rockpile table, one of the newest AVAs, with 160 acres of vineyards. The 2011 Biale Rockpile was pretty, with strawberry jam and ripe cherry, while the 2012 Rockpile was beguiling with spice, sandalwood and slate aromas that gave way to a beautifully fluid wine of inherent spiciness, fine tannins and exciting energy. 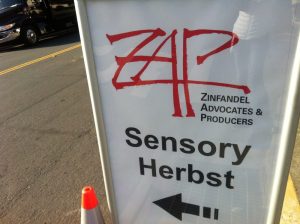 At the Herbst building, which hosted the “Sensory Tasting,” Flavor stations offered savory, sweet, spicy and sour – even umami – elements – to help people figure out how these worked with Zinfandel. It was a nice concept, and thank goodness for the food, but the place lacked ventilation and was egregiously dark. Some amazing wines were being poured here, including those from Jerome Winery in Arizona, who combined Zin with the most outlandish varietals represented, from Pinotage to Blaukenfrisch. Exciting stuff! 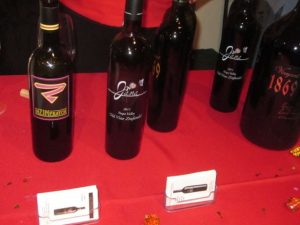 You also had mega stars Scott Harvey (loved the 2010 Old Vine 1869 from Amador), Carol Shelton (gotta love the 2011 Wild Thing! from Mendocino), Michael-David, Predator and Prisoner. Some major gems here, if you could get to the tables, especially the Brown Estate Vineyards offerings, which are always unctuously smooth and well-crafted. Again, Dave Brown’s 2012 Chiles Valley offering was the bomb for me, as melodious and pitch-perfect as Nat King Cole. Sensationally made! 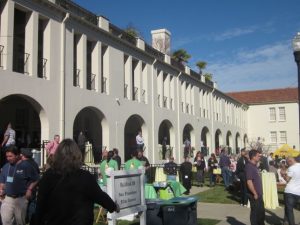 Another attractive venue on the Presidio grounds was the Film Center, where the “Reserve and Barrel Tasting” was conducted. Inside, it was light and bright, with lots of windows, which helped ventilation. Some wineries were pouring barrel samples, which is always fun, and there were lots of 2012 releases making their debut. The Renwood 2012 “Grand Ren” barrel sample was lovely, lithe and filled with promise, and the 2011 Renwood Gold Crest Vineyard was intriguingly zippy and energetic. The 2011 Sbragia Gino’s Vineyard from Dry Creek was wonderfully bright, cheery and as focused as an athlete about to head to the Winter Olympics.

All the Biale’s, from the yet to be released 2012 vintage, were stunning, especially the RW Moore Vineyard from Coombsville, as elegant and graceful a Zin as I have ever tasted. It was like a viola solo in soft moonlight. 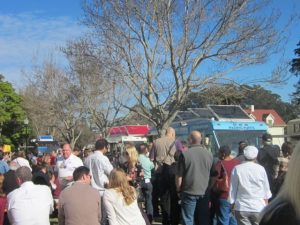 When tasting (and drinking) big alcohol wines like Zin, food is mandatory. Although there were food trucks, there were too few of them, and they were a bit hidden. Thank goodness for the Naked Juice guys, though! Their samples were healthily satisfying. Those who did purchase foodstuffs from the trucks (or the nearby Presidio café) seemed to enjoy consuming them, picnic-style, out on the various lawns and front porches of the officer’s quarters.

With all the people stretched out on the grass and on the many picnic tables, it looked like a cross between a frat party and a large family reunion on a summer’s day. Although the Zin flowed somewhat less freely this year, and the fresh air gave people a chance to sober up a bit between innings, there’s still no denying that Zinfandel is a uniquely California love affair that’s going strong.